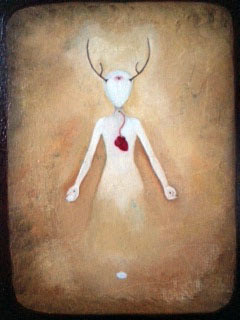 My uncle recently passed away and he enjoyed deer hunting in WI. Yesterday I tried piecing together my next painting and knew I'd paint a female with deer antlers in honor of him. I went to bed, head still reeling wondering what this new painting would be, upset at myself because I didn't have a direction. I laid there on my back and noticed my arm was turned up as though I was giving blood. I thought about how I gave blood every few months and the image of the painting came to me abruptly. The ideas floated in fast and choppy and suddenly I had a puzzle to solve, before I go to sleep of course. I sketched her out in my sketchbook, insisting I sleep and address the painting in the morning.

Here she is in progress after a few hours, already named Sapere Aude, Latin for 'dare to know/dare to be wise'.
Posted by Unknown at 4:28 PM 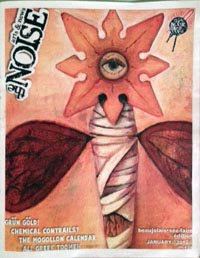 Blood, Bones and Heart
The paintings of Lisa Albinger have me staring for a long time, studying, trying to figure out what each detail means. The artist combines mythologies of the world along with her own. Her paintings are poignant and thought-provoking. The kind of picture that when you look into it, you move into it, and want to know more of the story underneath the paint.

Tree of Life portrays a symbol that has been used in so many belief systems, but while many other cultures show a full, blooming tree with roots that encompass the world, Ms. Albinger’s Tree of Life seems slender, stripped of its branches and wrapped up tight in bandages, two delicate wings sprouted from its sides, while one thoughtful eye looks out to the viewer from an eight pointed star that seems to rest on top like a crown. I must know more, and ask the artist to share her story behind the painting.

“Many times paintings unfold as I'm painting them,” Ms. Albinger tells me, “and while working on the head, a little bug flew into the paint, ultimately dying of course. Always a bit sad to see, because what can you do in that moment? So the wings were painted in honor of the bug. The mummy wrappings ... perhaps it's ready to unveil a new world, a new direction ... and then the painting I did after this, Talking God the figure is exposed. Initially I wanted Tree of Life to have a visible heart but it didn't work out that way. Talking God got it instead. The term ‘tree of life’ means a lot to me, as it is my favorite Frank Lloyd Wright window design and I'm very connected to trees. I love to represent people as trees. We have so many similarities. My figure is grounded and rooted to the ground and very stable. Shouldn't we all be that way? The ‘star’ head represents the four elements, and the power of the sun we're so blessed with in Arizona. My work is very much about personal power and how we choose to use it.”

Knowing she would grow up to be an artist when she was five years old, Ms. Albinger never even questioned it. “I couldn’t imagine not being interested in art, it’s in my blood, it’s my vitality,” she says. “In school all I could think about was being an artist and knowing this whole ‘high school life’ was so trivial. Years will pass and homecoming kings will get ugly, but I will still have my art.”
Using oil paint, cotton swabs and paintbrushes the artist creates these haunting and dream-like scenes. Ms. Albinger tells me that now she is finally painting the things she’s been feeling and wanting to be painting for years. “I found myself stuck in a web of mediocrity and I traded in what my work was for what I wanted it to be. Maybe it’s because I have my red hair back.”

In her new style Ms. Albinger finds herself painting blood and bones, combining imagery of alchemy, sacred geometry, animal lore and symbols. “Our physical bodies are amazing as is our connection to the universe,” she tells me.
“The creative process never shuts down during the day,” Ms. Albinger tells me of herself. “It can be maddening at times, which is why I need my hermit time. I could be out to dinner and notice the juxtaposition of the food on my plate … overhear a conversation, picking up a few words which inspires a painting, see the way the light casts a shadow of a particular object … my mind is constantly taking in seemingly uninteresting bits of information and storing them for future paintings. My life does show up in my art. I won’t separate the two because then I’d be painting a shell and god knows I’m a cornucopia.

“Inspiration hits at interesting times … last week while I did yoga I did a twist and bam! I figured out the missing puzzle in my painting,” she continues. “I had to quickly jot down the thought before it escaped me. Thanksgiving week I found a piece of plastic with 8 points, almost like a star. I thought hmm, interesting, maybe this will inspire a painting. Sure enough, it’s the ‘head’ of the image on this cover. Initially I thought a face would appear in the center but an eye did instead. My job is to just be a vessel for this information. Often it isn’t until the painting is finished that I know what it means, sometimes longer.”

Music and movies are usually the background soundtrack for Ms. Albinger as she creates, lately favoring Florence & the Machine and Blind Divine. “I’m a big Woody Allen fan and I often play a movie of his as I paint and laugh,” she says. “A costume of his in Love and Death inspired the attire of the bird man in my painting Isle of Wind and Wellspring. I’ve also played the 1975 movie Grey Gardens numerous times while painting which inspired the red hooded bird woman in Golden Nativity. I often give little ‘shout outs’ in my work to my inspirations. It’s my way of honoring their presence in my life.”

This January Ms. Albinger’s work can be found at Mountain Oasis in Flagstaff, and in Sedona another set of paintings will be at Lanning Gallery in Sedona, showcasing pieces that exemplify the evolution of her work.

“Paintings range from a 2005 collage painting to my recent owl with its heart in a bird nest, named Love Nest. ‘Wisdom’ is written on its forehead, an homage to the Greek Goddess Artemis’ own pet owl,” she says. “The theme throughout the birth of this piece is ‘home is where the heart is,’ as it was started in Oregon and finished in Arizona after my recent move. I’m creating a new sense of home and determining geographically where my heart is. Nest equates home, hence the heart is in the nest. My favorite number is 23 as is seen in the tree branch. The full moon is another element I often include.

“I believe my heart issue last year was trying to tell me I should ‘follow my heart’ and move to where I’d be happier, so I returned to Arizona. This painting was the final push to make me make that move. Finishing it here felt like myself and the painting had come full circle. Now the painting is in a gallery and her life will go on. I miss not seeing it in my studio. Also available at the gallery are Feast of Fate & Fowl and Isle of Wind and Wellspring, who are sisters because they were done one right after another and share the same color palette for the most part. They speak of rebirth, bridges to cross and celebration. Much of my work celebrates transitions. I love transitions and find myself in them consistently. I embrace change. The word ‘bored’ isn’t in my vocabulary. There’s always something more to do, to be, to learn.”
Posted by Unknown at 11:36 AM